Guide to Spaying or Neutering Your Kitten or Adult Cat

Today our Thomasville vets explain why spaying or neutering your kitten or adult cat not only prevents unwanted litters but can help to curb many undesirable behaviors.

The Importance of Getting Your Cat Fixed

Every year approximately 3.2 million cats enter US animal shelters, according to the American Society for the Prevention of Cruelty to Animals (ASPCA).

Spaying or neutering your cat or kitten is essential for helping to reduce the number of unwanted cats in Davidson County shelters.

Beyond reducing the number of unwanted cats in your neighborhood, spaying and neutering can also help to curb some undesirable cat behaviors, and help to reduce your cat's risk of developing a number of serious feline health conditions.

Getting Your Cat Fixed - Neuter or Spay

Getting a pet 'fixed' is a generic term that covers both the neutering of male pets and spaying of female pets.

When you have your male cat neutered the cat's testes are surgically removed. This surgery is sometimes called castration.

Removal of the testes prevents the production of sperm. Which means that, after your male cat has been 'fixed' he will no longer be able to father kittens.

When you have your female cat spayed, the uterus and ovaries, (or sometimes just the ovaries), are surgically removed.

Your female cat will no longer be able to have kittens after she has been 'fixed'.

Benefits of Neutering Your Male Cat

By neutering your male cat you can help slow the spread of Feline immunodeficiency virus (FIV) and Feline leukemia virus (FeLV) which are frequently spread between cats during fights. Neutered males tend to fight less than unneutered males, which may also help to reduce the number of injuries from fighting. Your cat's risk of being injured by vehicles may also be reduced by neutering since neutered males tend to roam less and generally prefer to stay closer to home.

Unneutered males spray to mark their territory and often fight with other male cats. This behavior can be smelly, bothersome, and very noisy. Having your male kitten neutered young can help to prevent your cat from spraying inside your home, and generally reduce your male cat's level of aggression towards people and other cats. Neutering your male cat can also help to prevent him from roaming over large areas in search of unspayed females to mate with.

Benefits of Spaying Your Female Cat

Before your adorable little kitten is even six months old she may be mature enough to have kittens. Your cat could have as many as 4 litters a year, and an average litter can range in size from 2 to 10 kittens. This means that, in just one year your cat could produce as many as 40 kittens! That is a staggering number of unwanted cats. Help to reduce the number of unwanted cats in Davidson County by spaying your female kitten before she is mature enough to have kittens of her own.

You help to reduce your cat's risk of pyometra (infection of the womb) as well as mammary tumors by spaying your kitten before she has her first heat. Female cats carrying infectious diseases can pass serious conditions on to their kittens who go on to spread the disease even further. So, by spaying your female kitten while she is young you help to prevent the spread of serious feline diseases. Pregnancy and birthing can be difficult for cats. Cat owners should be aware that caring for a female cat through her pregnancy, and throughout the birth process can be costly.

According to recent estimates, cats in the USA kill between 1.4 billion and 3.7 billion birds each year. By getting your cat fixed you help to save the lives of countless birds and other wildlife creatures.

When Should You Get Your Cat Fixed?

To find out more about getting your kitten spayed or neutered, contact our Thomasville veterinary clinic today for more information, or to book an appointment. 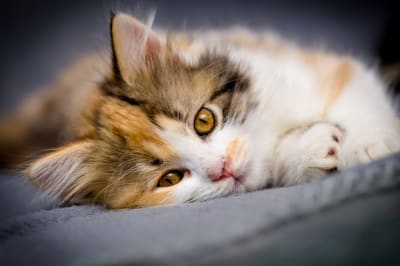 Looking for a vet in the Thomasville area?

When is the best time to have your dog neutered or spayed?

Having your dog spayed or neutered not only prevents unwanted litters, but can also help to curb undesirable behaviors and even reduce the risk of certain diseases. Here, our Davidson County vets explain why getting your dog fixed could save you money and hassle.

My dog is constipated! What should I do?

Constipation is one of the most common digestive issues our Davidson County vets see in dogs, and it can be a sign of a life-threatening health issue. Here's why...

In today's article, our Davidson County vets discuss the possible side effects of dog vaccinations for Bordetella and answer other frequently asked questions surrounding optional shots for dogs.

To help you understand why your four-legged family member may need a CT scan or PET scan our Thomasville vets explain what PET/CT technology is used for and what you should expect when you take your pet in for diagnostic imaging.

X-Rays for Dogs - What to Expect

If your dog is booked to have an x-ray (radiograph) you may be wondering how the appointment will work and how you can prepare. Below, our Thomasville vets share what you can expect when you bring your dog to us for an x-ray.

Whether you need urgent care for your pet or you're looking for a vet in Davidson County, we welcome you to our family at Thomasville Veterinary Hospital Urgent Care + Surgery.

Referrals may be required for some specialty services. Please contact us to learn more.